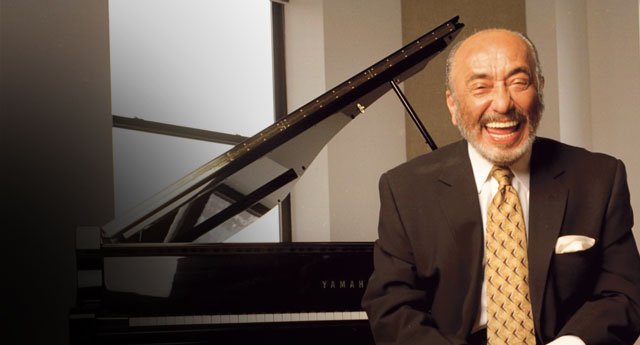 Eddie Palmieri, known for his charismatic power and bold pioneering drive, has a musical career that spans over 50 years as a bandleader of both Salsa and Latin Jazz orchestras.  Born in Spanish Harlem in 1936, Eddie began piano studies at an early age, as did his celebrated older brother, the late Salsa legend and pianist, Charlie Palmieri.  For Latin New Yorkers of Eddie’s generation, music was a vehicle out of El Barrio. At age 11, he auditioned at Weil Recital Hall, next door to Carnegie Hall, a venue as far from the Bronx as he could imagine.  Possessed by a desire to play the drums, Palmieri joined his Uncle’s orchestra at age 13, where he played timbales.  Says Palmieri, “By 15, it was good-bye timbales and back to the piano until this day. I’m a frustrated percussionist, so I take it out on the piano.”

Eddie Palmieri has a discography that includes 36 titles and has been awarded ten Grammy Awards.  The first Grammy Award he received was in 1975 for the recording entitled “The Sun of Latin Music,” a historic moment, as it was the first time the National Academy of Recording Arts & Sciences (NARAS) recognized Latin Music.  He would win again the following year for “Unfinished Masterpiece,” “Palo Pa ‘ Rumba” in 1984, “Solito” in 1985 and “La Verdad” in 1987.  He received both a Latin Grammy and a traditional Grammy for the 2000 release with Tito Puente entitled “Obra Maestra/Masterpiece,” “Listen Here!” would win in 2006 and “Simpatico” in 2007, a collaborative effort with trumpet master Brian Lynch. “Simpatico” was also recognized by the Jazz Journalist Association as Best Latin Jazz Album.  In November, 2013 Mr. Palmieri received the Latin Academy of Recording Arts & Sciences (LARAS) Lifetime Achievement Award.  In 1993, he was appointed to the Board of Governors of the New York chapter of the National Academy of Recording Arts and Sciences, and in 1995 he was instrumental in creating the new category for Latin Jazz.  His album “Palmas” was among the nominees in this newly created category, and in 1996 he was nominated once again for his album “Arete.”

Eddie began his professional career as a pianist in the early ’50s with Eddie Forrester’s Orchestra.  In 1955 he joined Johnny Segui’s band. He also spent a year with the Tito Rodriguez Orchestra before forming his own band, the legendary “La Perfecta” in 1961.  La Perfecta was unique in that it featured a trombone section in place of trumpets (led by the late Barry Rogers), something that had been rarely done in latin music, demonstrating the early stages of Palmieri’s unorthodox means of orchestration. They were known as “the band with the crazy roaring elephants” because of the configuration of two trombones, flute, percussion, bass and a vocalist. With its one of a kind sound, La Perfecta soon joined the ranks of Machito, Tito Rodriguez and other major Latin orchestras of the day. Palmieri’s influences include not only his older brother Charlie but also Jesus Lopez, Lili Martinez and other Cuban players of the 1930s and 1940s; jazz luminaries such as Art Tatum, Bobby Timmons, Bill Evans, Horace Silver, Bud Powell and McCoy Tyner.  Says Palmieri, “In Cuba, there was a development and crystallization of rhythmical patterns that have excited people for years.  Cuban music provides the fundamental from which I never move. Whatever has to be built must be built from there.  It’s a cross-cultural effect that makes magnificent music.”

His unconventional style would once again surprise critics and fans with the 1970 release entitled “Harlem River Drive.”  This recording was the first to merge black and latin styles resulting in a free-form sound that encompassed elements of salsa, funk, soul and jazz. This new fusion moved effortlessly from mood, groove, texture and excitement with its multi-dimensional guitar, funky piano riffs, notable brass and unforgettable rhythm section.  Led by Eddie, the group also included his brother Charlie, as well as excellent players from both communities such as Victor Venegas, Andy Gonzales, Bernard “Pretty” Purdie and Ronnie Cuber.  Further to this proclivity for creating and performing in funk latin style, Little Louie Vega invited Eddie to record “Nuyorican Soul,” in 1997, a release which became a huge hit with dancers and dj’s in the house and underground music scene.

In 1988, the Smithsonian Institute recorded two of Mr. Palmieri’s performances for the catalog of the National Museum of American History in Washington , D.C. , a rare public honor.  In 1990, he was invited by Paul Simon to serve as a consultant on his releaseRhythm of the Saints.  Mr. Palmieri was awarded the Eubie Blake Award by Dr. Billy Taylor in 1991, and is among the very few Latin musicians recognized by both the Legislative Assembly of Puerto Rico and New York State.  The 1998 Heineken Jazz Festival in San Juan, Puerto Rico paid tribute to his contributions as a bandleader, bestowing him an honorary doctorate degree from the Berklee College of Music.  In 2002, Yale University awarded Mr. Palmieri the Chubb Fellowship Award, an award usually reserved for international heads of state, but given to him in recognition of his work in building communities through music.  That same year he received the National Black Sports and Entertainment Lifetime Achievement Award.  Other inductees were Roberto Clemente, Count Basie, Max Roach, Billie Holiday and Dinah Washington.  Also in 2002, Eddie was recognized by the London BBC, with the Award for Most Exciting Latin Performance.  In 2005, Mr. Palmieri received another series of prestigious awards:  the Alice Tully African Heritage Award from City College, the Harlem Renaissance Award and he was inducted into both the Bronx Walk of Fame and the Chicago Walk of Fame.  He received the Lifetime Achievement Award from Urban Latino Magazine and acted as Godfather of the Puerto Rican Day Parade in New York City, as well as received the EL Award from El Diario Newspaper. Yet another outstanding achievement that year was the debut of “Caliente,” a radio show hosted by Mr. Palmieri on National Public Radio.  The show was a tremendous success being picked up by more than 160 radio stations, nationwide.  In 2008, he received the Jay McShann Lifetime Achievement Award and was inducted into the Oklahoma Jazz Hall of Fame.  Yet another extraordinary achievement, Mr. Palmieri’s composition “Azucar Pa’ Ti” was inducted into the 2009 National Recording Registry of the United States Library of Congress as a significant and compelling sound recording of 1965. All inductees were selected for showcasing “…the diverse beauty, humanity and artistry found in the American soundscape.” Mr. Palmieri is honored to be in the great company of other inductees such as The Band, Willie Nelson, Loretta Lynn, The Staple Singers, Patti Smith, Cliff Edwards, Little Richard and R.E.M., among many others. In April, 2010, he was included in the Celebrity Gallery of the first global Museum of Musical Instruments located in Phoenix, Arizona and on November 16, 2010 he will be inducted into the Long Island Music Hall of Fame.

Eddie Palmieri’s musical style is paradoxical in nature: married to preserving the core fundamentals of latin orchestral tradition, he is possessed by a bold innovative drive and seeks all opportunities to challenge these very traditions.  Eddie’s unique vision and distinctive arrangements have paved the way for ground-breaking compositions, ensuring a unique musical legacy.  Eddie has one of the most actively touring Salsa and Latin Jazz orchestras to date, tours of which have taken him to Europe, Asia, Latin America, Australia, North Africa and throughout the Caribbean.  A true powerhouse of brilliance, he has shown that time is infinite with respect to his repertoire, as he continues to captivate live audiences throughout the world.